“Head and heart always in Berching”: HUBER SE celebrated its 150th anniversary with a great party

29.06.2022
150 good reasons for a celebration in the home town of Berching: HUBER SE celebrated its 150th company anniversary on Saturday, 25 June 2022, with a great employee party at the fairground in Berching. As guests at the internal celebration, the management board and supervisory board welcomed employees from the company headquarters in Erasbach as well as service and field staff from all over Germany as well as Berching’s First Mayor Ludwig Eisenreich. 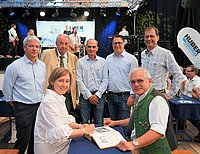 "Golden signage"“: Supervisory Board member Johanna Rong proudly signed Golden Book of the town of Berching together with the members of the Management Board and and former State Secretary Hans Spitzner.

The white and blue decorated marquee was very well filled.

After the “come-together” champagne reception in a relaxed atmosphere and bright sunshine, the guests took their seats in the marquee, which was decorated in a wonderfully traditional Bavarian style and in the HUBER colours of white and blue. While the evening sun was setting in the Altmühl Valley on the summer solstice weekend of St. John’s Eve, the two shareholders Johanna Rong (Member of the Supervisory Board) and Georg Huber (CEO) as well as Berching’s First Mayor Ludwig Eisenreich addressed their words of greeting to the celebrating guests at the beginning of the celebration event.

Mayor Eisenreich: “HUBER is a beacon and ambassador”

“Active worldwide, at home in Bavaria: HUBER SE is not just any company in Berching, it has rather become a beacon and ambassador for us”, emphasised Berching’s First Mayor Ludwig Eisenreich in his greeting speech. “A shining beacon that signals both internally and externally: something special is happening here. Here in Berching, in the Upper Palatinate, innovative products are developed and manufactured for a clean environment and for the purification and treatment of the valuable commodity water. A beacon that, as a family business, has at the same time remained close to home and down-to-earth.”

“During all the activities, changes and upheavals that have taken place over time, the head and heart of the company have always been here in Berching,” said Georg Huber (CEO and shareholder) in his celebratory speech. “The developments over the decades that have brought us to this point were initiated in Berching and significantly shaped by the people from this region. I’m not just talking about the decisions that set the course, but about the craftsmanship, the personal responsibility and the will to constantly want to do things better. And last but not least, the support of the relatives and their interest and participation in the work and the company – as it shows again tonight, at this special celebration.”

From the construction of one of the first water pipes in Sulzbürg by the then coppersmith’s shop to the projects implemented by HUBER today, one of the thematic brackets is the element of water, he said: “In our world, clean water has become a dwindling natural resource. Where water scarcity becomes a problem, entire ecosystems and societies suffer. And while until a few years ago you tended to hear about these problems from far away regions, today you don’t have to look very far.” The reuse of wastewater, the treatment of drinking water and the recycling of sewage sludge are global challenges that the company also wants to take on and solve in the future.

Johanna Rong: “Seeing employees as an essential part of the whole”

“HUBER is family-run in the sixth generation, we are economically independent and can make all decisions ourselves,” said Johanna Rong (née Huber, shareholder and Member of the Supervisory Board) in her welcoming speech. “We do everything to ensure that HUBER is a stable and reliable employer now and in the future. For further positive development, it is important that we continue to see our employees as an essential part of the whole, in addition to strategic topics such as investments at home and abroad, market development, innovations and digitalisation. Because the challenges of the future can only be mastered together and with mutual respect.”

Speeches, buffet and entertainment by comedian Willy Astor and the band “TZone”

The comedian, musician and composer Willy Astor and the band “TZone” provided the entertainment after the official speeches and the buffet. This way, the HUBER family celebrated 150 years of successful company and family history in a fitting manner – and is already eagerly looking forward to the next highlight in 2022: on Saturday, 2 July, the company invites everyone to an open day at the company headquarters from 8 am to 2 pm, before from 5 p.m. the “Platzfest” takes place, an open-air party at the town square in Berching, that HUBER supports as official sponsor.